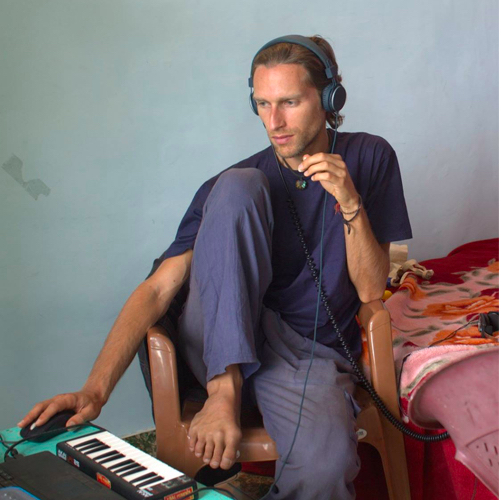 After first traveling in India, Tikki Masala was inspired by the deep flavors of authentic Indian classical music. He blends together sounds of Indian classical instruments like Sitar, Tabla, Santoor, Sarod, Flute, Tanpura, Harmonium and Vocals… with beats, synthesizers, drums and percussion. Recordings made across India from Bhajans, Kirtans, Mantras, street musicians, fellow travelers, jam sessions, concerts, nature and temple sounds are mixed together with psychedelic hypnotic electronic sounds, rhythms and bass lines.
After some time the music evolved to world Beat, tribal, ethnic fusion, dance music with influences from all over the world.
The interest in dance became more present, he discovered Ecstatic dance and other forms of dance and found that dancing was so beneficial for the personal, emotional, physical and spiritual development, opening up and discovering the freedom and authenticity.
He started to pick dj’ing again and playing a lot of hes creations at ecstatic dance events.
There was a call to start organising, holding space and play at ecstatic dance events in India, thailand and Europe.
And share with others, what was for him such a beautiful exploration and growing in the being.

Before traveling he was producing different music genres like lounge, Techno, House, Drum & Bass, ambient…
Masala in Hindi means a mixture of spices and herbs to create different dishes and tastes.
The name Tikki Masala was born after the first journey to India, where the idea came to still explore different music genres and allways use indian sounds in he’s
productions, making a masala of Indian and electronic sounds, and later on a Masala of sounds from all over the world.
listen to some of the creations and mixes here…